Post scriptum note added on 11 July 2016: This is one of the more speculative posts which led to my e-publication analyzing the wavefunction as an energy propagation. With the benefit of hindsight, I would recommend you to immediately the more recent exposé on the matter that is being presented here, which you can find by clicking on the provided link.

In my previous posts, I juxtaposed the following images: 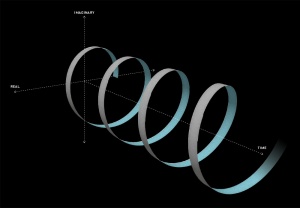 We already drew attention to the fact that an equation like this models some flow. To be precise, the Laplacian on the right-hand side is the second derivative with respect to x here, and, therefore, expresses a flux density: a flow per unit surface area, i.e. per square meter. To be precise: the Laplacian represents the flux density of the gradient flow of ψ.

So our diffusion constant here is ħ/2m. Because of the Uncertainty Principle, m is always going to be some integer multiple of ħ/2, so ħ/2m = 1, 1/2, 1/3, 1/4 etcetera. In other words, the ħ/2m term is the inverse of the mass measured in units of ħ/2. We get the terms of the harmonic series here. How convenient! 🙂

In our previous posts, we studied the wavefunction for a zero-mass particle. Such particle has zero rest mass but – because of its movement – does have some energy, and, therefore, some mass and momentum. In fact, measuring time and distance in equivalent units (so c = 1), we found that E = m = p = ħ/2 for the zero-mass particle. It had to be. If not, our equations gave us nonsense. So Schrödinger’s equation was reduced to:

How elegant! We only need to explain that imaginary unit (i) in the equation. It does a lot of things. First, it gives us two equations for the price of one—thereby providing a propagation mechanism indeed. It’s just like the E and B vectors. Indeed, we can write that ∂ψ/∂t = i·∇2ψ equation as:

You should be able to show that the two equations above are effectively equivalent to Schrödinger’s equation. If not… Well… Then you should not be reading this stuff.] The two equations above show that the real part of the wavefunction feeds into its imaginary part, and vice versa. Both are as essential. Let me say this one more time: the so-called real and imaginary part of a wavefunction are equally real—or essential, I should say!

Second, i gives us the circle. Huh? Yes. Writing the wavefunction as ψ = a + i·b is not just like writing a vector in terms of its Cartesian coordinates, even if it looks very much that way. Why not? Well… Never forget: i2= −1, and so—let me use mathematical lingo here—the introduction of i makes our metric space complete. To put it simply: we can now compute everything. In short, the introduction of the imaginary unit gives us that wonderful mathematical construct, ei(kx − ωt), which allows us to model everything. In case you wonder, I mean: everything! Literally. 🙂

However, we’re not going to impose any pre-conditions here, and so we’re not going to make that E = m = p = ħ/2 assumption now. We’ll just re-write Schrödinger’s equation as we did last time—so we’re going to keep our ‘diffusion constant’ ħ/2m as for now:

So we have two pairs of equations now. Can they be related? Well… They look the same, so they had better be related! 🙂 Let’s explore it. First note that, if we’d equate the direction of propagation with the x-axis, we can write the E vector as the sum of two y- and z-components: E = (Ey, Ez). Using complex number notation, we can write E as:

In case you’d doubt, just think of this simple drawing:

The next step is to imagine—funny word when talking complex numbers—that Ey and Ez are the real and imaginary part of some wavefunction, which we’ll denote as ψE = ei(kx − ωt). So now we can write:

What’s k and ω? Don’t worry about it—for the moment, that is. We’ve done nothing special here. In fact, we’re used to representing waves as some sine or cosine function, so that’s what we are doing here. Nothing more. Nothing less. We just need two sinusoids because of the circular polarization of our electromagnetic wave.

Are we? How does that work? The time derivative on the left-hand side is equal to:

The second-order derivative on the right-hand side is equal to:

So the two equations above are equivalent to writing:

Both conditions are fulfilled if, and only if, ω = k2·(ħ/2m). Now, assuming we measure time and distance in equivalent units (c = 1), we can calculate the phase velocity of the electromagnetic wave as being equal to c = ω/k = 1. We also have the de Broglie equation for the matter-wave, even if we’re not quite sure whether or not we should apply that to an electromagnetic wave. In any case, the de Broglie equation tells us that k = p/ħ. So we can re-write this condition as:

So that’s different from the E = m = p equality we imposed when discussing the wavefunction of the zero-mass particle: we’ve got that 1/2 factor which bothered us so much once again! And it’s causing us the same trouble: how do we interpret that m = p/2 equation? It leads to nonsense once more! E = m·c2 = m, but E is also supposed to be equal to p·c = p. Here, however, we find that E = p/2! We also get strange results when calculating the group and phase velocity. So… Well… What’s going on here?

I am not quite sure. It’s that damn 1/2 factor. Perhaps it’s got something to do with our definition of mass. The m in the Schrödinger equation was referred to as the effective or reduced mass of the electron wavefunction that it was supposed to model. Now that concept is something funny: it sure allows for some gymnastics, as you’ll see when going through the Wikipedia article on it! I promise I’ll dig into it—but not now and here, as I’ve got no time for that. 😦

However, the good news is that we also get a magnetic field vector with an electromagnetic wave: B. We know B is always orthogonal to E, and in the direction that’s given by the right-hand rule for the vector cross-product. Indeed, we can write B as B = ex×E/c, with ex the unit vector pointing in the x-direction (i.e. the direction of propagation), as shown below.

Should we just add mE and mE to get a total momentum and, hence, a total energy, that’s equal to E = m = p for the whole wave? I believe we should, but I haven’t quite figured out how we should interpret that summation!

So… Well… Sorry to disappoint you. I haven’t got the answer here. But I do believe my instinct tells me the truth: the wavefunction for an electromagnetic wave—so that’s the wavefunction for a photon, basically—is essentially the same as our wavefunction for a zero-mass particle. It’s just that we get two wavefunctions for the price of one. That’s what distinguishes bosons from fermions! And so I need to figure out how they differ exactly! And… Well… Yes. That might take me a while!

In the meanwhile, we should play some more with those E and B vectors, as that’s going to help us to solve the riddle—no doubt!

Fiddling with E and B

It’s an interesting way of looking at things. Let’s look at the equations we started this post with, i.e. Maxwell’s equations in free space—i.e. no stationary charges, and no currents (i.e. moving charges) either! So we’re talking those ∂B/∂t = –∇×E and ∂E/∂t = ∇×B equations now.

Note that they actually give you four equations, because they’re vector equations:

To figure out what that means, we need to remind ourselves of the definition of the curl operator, i.e. the ∇× operator. For E, the components of ∇×E are the following:

So the four equations above can now be written as:

What can we do with this? Well… The x-component of E and B is zero, so one of the two terms in the equations simply disappears. We get:

Interesting: only the derivatives with respect to x remain! Let’s calculate them:

This result can, obviously, be true only if ω = k, which we assume to be the case, as we’re measuring time and distance in equivalent units, so the phase velocity is  c = 1 = ω/k.

Hmm… I am sure it won’t be long before I’ll be able to prove what I want to prove. I just need to figure out the math. It’s pretty obvious now that the wavefunction—any wavefunction, really—models the flow of energy. I just need to show how it works for the zero-mass particle—and then I mean: how it works exactly. We must be able to apply the concept of the Poynting vector to wavefunctions. We must be. I’ll find how. One day. 🙂

As for now, however, I feel we’ve played enough with those wavefunctions now. It’s time to do what we promised to do a long time ago, and that is to use Schrödinger’s equation to calculate electron orbitals—and other stuff, of course! Like… Well… We hardly ever talked about spin, did we? That comes with huge complexities. But we’ll get through it. Trust me. 🙂

4 thoughts on “The photon wavefunction”