As I talked about Feynman’s equation for electromagnetic radiation in my previous post, I thought I should add a few remarks on wave-particle duality, but then I didn’t do it there, because my post would have become way too long. So let me add those remarks here. In fact, I’ve written about this before, and so I’ll just mention the basic ideas without going too much in detail. Let me first jot down the formula once again, as well as illustrate the geometry of the situation:

The gist of the matter is that light, in classical theory, is a traveling electromagnetic field caused by an accelerating electric charge and that, because light travels at speed c, it’s the acceleration at the retarded time t – r/c, i.e. a‘ = a(t – r/c), that enters the formula. You’ve also seen the diagrams that accompany this formula:

The two diagrams above show that the curve of the electric field in space is a “reversed” plot of the acceleration as a function of time. As I mentioned before, that’s quite obvious from the mathematical behavior of a function with argument like the argument above, i.e. a function F(t – r/c). When we write t – r/c, we basically measure distance units in seconds, instead of in meter. So we basically use c as the scale for both time as well as distance. I explained that in a previous post, so please have a look there if you’d want so see how that works.

So it’s pretty straightforward, really. However, having said that, when I see a diagram like the one above, so all of these diagrams plotting an E or B wave in space, I can’t help thinking it’s somewhat misleading: after all, we’re talking something traveling at the speed of light here and, therefore, its length – in our frame of reference – should be zero. And it is, obviously. Electromagnetic radiation comes packed in point-like, dimensionless photons: the length of something that travels at the speed of light must be zero.

Now, I don’t claim to know what’s going on exactly, but my thinking on it may not be far off the mark. We know that light is emitted and absorbed by atoms, as electrons go from one energy level to another, and the energy of the photons of light corresponds to the difference between those energy levels (i.e. a few electron-volt only, typically: it’s given by the E = h·ν relation). Therefore, we can look at a photon as a transient electromagnetic wave. It’s a very short pulse: the decay time for one such pulse of sodium light, i.e. one photon of sodium light, is 3.2×10–8 seconds. However, taking into account the frequency of sodium light (500 THz), that still makes for some 16 million oscillations, and a wave-train with a length of almost 10 meter. [Yes. Quite incredible, isn’t it?] So the photon could look like the transient wave I depicted below, except… Well… This wavetrain is traveling at the speed of light and, hence, we will not see it as a ten-meter long wave-train. Why not? Well… Because of the relativistic length contraction, it will effectively appear as a point-like particle to us.

So relativistic length contraction is why the wave and particle duality can be easily reconciled in electromagnetism: we can think of light as an irregular beam of point-like photons indeed, as one atomic oscillator after the other releases a photon, in no particularly organized way. So we can think of photons as transient wave-trains, but we should remind ourselves that they are traveling at the speed of light, so they’ll look point-like to us.

The idea is shown below. The electron is depicted as an incoming plane wave which effectively breaks up as it goes through the slits. The slit on the left has no ‘filter’ (which you may think of as a detector) and, hence, the plane wave goes through as a cylindrical wave. The slit on the right-hand side is covered by a ‘filter’ made of several layers of ‘low atomic number material’, so the electron goes through but, at the same time, the barrier creates a spherical wave as it goes through. The researchers note that “the spherical and cylindrical wave do not have any phase correlation, and so even if an electron passed through both slits, the two different waves that come out cannot create an interference pattern on the wall behind them.” [I hope I don’t have to remind you that, while being represented as ‘real’ waves here, the ‘waves’ are, obviously, complex-valued psi functions.]

In fact, to be precise, the experimenters note that there still was an interference effect if the filter was thin enough. Let me quote the reason for that: “The thicker the filter, the greater the probability for inelastic scattering. When the electron suffers inelastic scattering, it is localized. This means that its wavefunction collapses and, after the measurement act, it propagates roughly as a spherical wave from the region of interaction, with no phase relation at all with other elastically or inelastically scattered electrons. If the filter is made thick enough, the interference effects cancels out almost completely.”

This does not solve the ‘mystery’ of the double-slit experiment, but it throws doubt on how it’s usually being explained. The mystery in such experiments is that, when we put detectors, it is either the detector at A or the detector at B that goes off. They should never go off together—”at half strength, perhaps”, as Feynman puts it. But so there are doubts here now. Perhaps the electron does go through both slits at the same time! And so that’s why I used italics when writing “even if an electron passed through both slits”: the electron, or the photon in a similar set-up, is not supposed to do that according to the traditional explanation of the results of the double-slit experiment! It’s one or the other, and the wavefunction collapses or reduces as it goes through.

However, that’s where these so-called ‘weak measurement’ experiments now come in, like this 2010 experiment: it does not prove but indicates that interaction does not have to be that way. They strongly suggest that it is not all or nothing, that our observations should not necessarily destroy the wavefunction. So, who knows, perhaps we will be able, one day, to show that the wavefunction does go through both slits, as it should (otherwise the interference pattern cannot be explained), and then we will have resolved the paradox.

I am pretty sure that, when that’s done, physicists will also be able to relate the image of a photon as a transient electromagnetic wave (cf. the diagram above), being emitted by an atomic oscillator for a few nanoseconds only (we gave the example for sodium light, for which the decay time was 3.2×10–8 seconds) with the image of a photon as a particle that can be represented by a complex-valued probability amplitude function (cf. the diagram below). I look forward to that day. I think it will come soon.

Here I should add two remarks. First, a lot has been said about the so-called indivisibility of a photon, but inelastic scattering implies that photons are not monolithic: the photon loses energy to the electron and, hence, its wavelength changes. Now, you’ll say: the scattered photon is not the same photon as the incident photon, and you’re right. But… Well. Think about it. It does say something about the presumed oneness of a photon. 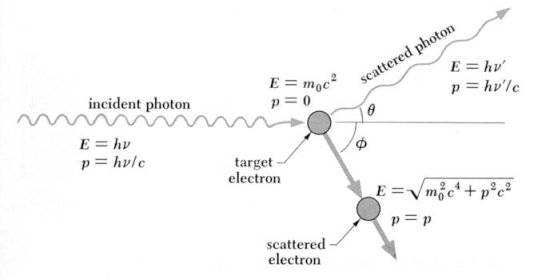 The other remark is on the mathematics of interference. Photons are bosons and, therefore, we have to add their amplitudes to get the interference effect. So you may try to think of an amplitude function, like Ψ = (1/√2π)·eiθ or whatever, and think it’s just a matter of ‘splitting’ this function before it enters the two slits and then ‘putting it back together’, so to say, after our photon has gone through the slits. [For the detailed math of interference in quantum mechanics, see my page on essentials.]  Well… No. It’s not that simple. The illustration with that plane wave entering the slits, and the cylindrical and/or spherical wave coming out, makes it obvious that something happens to our wave as it goes through the slit. As I said a couple of times already, the two-slit experiment is interesting, but the interference phenomenon – or diffraction as it’s called – involving one slit only is at least as interesting. So… Well… The analysis is not that simple. Not at all, really. 🙂