In my previous post, I mentioned that it was not so obvious (both from a physical as well as from a mathematical point of view) to write the wavefunction for electron orbitals – which we denoted as ψ(x, t), i.e. a function of two variables (or four: one time coordinate and three space coordinates) – as the product of two other functions in one variable only.

As I mentioned before, the physicists’ use of the same symbol (ψ, psi) for both the ψ(x, t) and ψ(x) function is quite confusing – because the two functions are very different:

Now you should cry foul, of course: ψ(x) is not necessarily real-valued. It may be complex-valued. You’re right. You know the formula:

Note the derivation of this formula involved a switch from Cartesian to polar coordinates here, so from x = (x, y, z) to r = (r, θ, φ), and that the function is also a function of the two quantum numbers l and m now, i.e. the orbital angular momentum (l) and its z-component (m) respectively. In my previous post(s), I gave you the formulas for Yl,m(θ, φ) and Fl,m(r) respectively. Fl,m(r) was a real-valued function alright, but the Yl,m(θ, φ) had that ei·m·φ factor in it. So… Yes. You’re right: the Yl,m(θ, φ) function is real-valued if – and only if – m = 0, in which case ei·m·φ = 1. Let me copy the table from Feynman’s treatment of the topic once again: 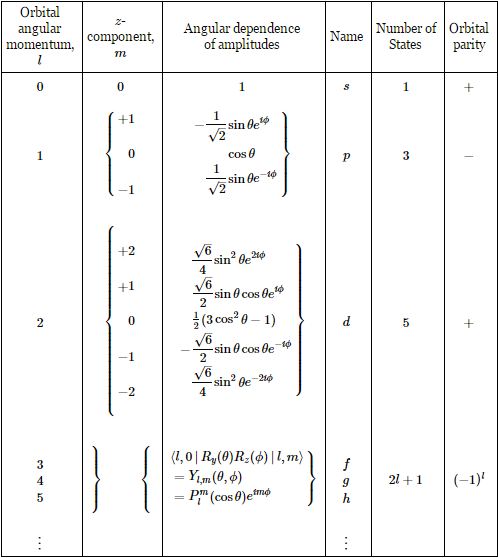 The Plm(cosθ) functions are the so-called (associated) Legendre polynomials, and the formula for these functions is rather horrible:

Please read the above once again and – more importantly – think about it for a while. 🙂 You’ll have to agree with the following:

Let’s first look at the envelope function again. Let me copy the illustration for n = 5 and l = 2 from a Wikimedia Commons article. Note the symmetry planes:

The first symmetry plane – or symmetry line, really (i.e. the z-axis) – should not surprise us, because the azimuthal angle φ is conspicuously absent in the formula for our envelope function if, as we are doing in this article here, we merge the ei·m·φ factor with the e−i·(E/ħ)·t, so it’s just part and parcel of what the author of the illustrations above refers to as the ‘complex phase’ of our wavefunction. OK. Clear enough – I hope. 🙂 But why is the the xy-plane a symmetry plane too? We need to look at that monstrous formula for the Plm(cosθ) function here: just note the cosθ argument in it is being squared before it’s used in all of the other manipulation. Now, we know that cosθ = sin(π/2 − θ). So we can define some new angle – let’s just call it α – which is measured in the way we’re used to measuring angle, which is not from the z-axis but from the xy-plane. So we write: cosθ = sin(π/2 − θ) = sinα. The illustration below may or may not help you to see what we’re doing here. 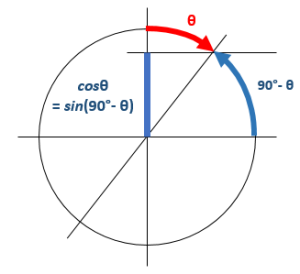 So… To make a long story short, we can substitute the cosθ argument in the Plm(cosθ) function for sinα = sin(π/2 − θ). Now, if the xy-plane is a symmetry plane, then we must find the same value for Plm(sinα) and Plm[sin(−α)]. Now, that’s not obvious, because sin(−α) = −sinα ≠ sinα. However, because the argument in that Plm(x) function is being squared before any other operation (like subtracting 1 and exponentiating the result), it is OK: [−sinα]2 = [sinα]2 = sin2α. […] OK, I am sure the geeks amongst my readers will be able to explain this more rigorously. In fact, I hope they’ll have a look at it, because there’s also that dl+m/dxl+m operator, and so you should check what happens with the minus sign there. 🙂

[…] Well… By now, you’re probably totally lost, but the fact of the matter is that we’ve got a beautiful result here. Let me highlight the most significant results:

It’s worth thinking about this. Look at the geometry of the situation again – as depicted below. We’re looking at the situation along the x-axis, in the direction of the origin, which is the nucleus of our atom.

The ei·m·φ factor just gives us phase shift: just a re-set of our zero point for measuring time, so to speak. Interesting, weird – but probably less relevant than the e−i·[(E/ħ)·t factor, which gives us the two-dimensional oscillation that captures the energy of the state.

So… Well… My guts instinct tells me the real and imaginary part of our wavefunction just represent, somehow, a rapidly changing force on some unit of mass, but then I am not sure how to define that unit right now (it’s probably not the kilogram!).

Now, there is another thing we should note here: we’re actually sort of de-constructing a rotation (look at the illustration above once again) in two linearly oscillating vectors – one along the z-axis and the other along the y-axis. Hence, in essence, we’re actually talking about something that’s spinning. In other words, we’re actually talking some torque around the x-axis. In what direction? I think that shouldn’t matter – that we can write E or −E, in other words, but… Well… I need to explore this further – as should you! 🙂

Let me just add one more note on the ei·m·φ factor. It sort of defines the geometry of the complex phase itself. Look at the illustration below. Click on it to enlarge it if necessary – or, better still, visit the magnificent Wikimedia Commons article from which I get these illustrations. These are the orbitals n = 4 and l = 3. Look at the red hues in particular – or the blue – whatever: focus on one color only, and see how how – for m = ±1, we’ve got one appearance of that color only. For m = ±1, the same color appears at two ends of the ‘tubes’ – or tori (plural of torus), I should say – just to sound more professional. 🙂 For m = ±2, the torus consists of three parts – or, in mathematical terms, we’d say the order of its rotational symmetry is equal to 3. Check that Wikimedia Commons article for higher values of n and l: the shapes become very convoluted, but the observation holds. 🙂

Have fun thinking all of this through for yourself – and please do look at those symmetries in particular. 🙂

Post scriptum: You should do some thinking on whether or not these m = ±1, ±2,…, ±l orbitals are really different. As I mentioned above, a phase difference is just what it is: a re-set of the t = 0 point. Nothing more, nothing less. So… Well… As far as I am concerned, that’s not a real difference, is it? 🙂 As with other stuff, I’ll let you think about this for yourself.

Some content on this page was disabled on June 17, 2020 as a result of a DMCA takedown notice from Michael A. Gottlieb, Rudolf Pfeiffer, and The California Institute of Technology. You can learn more about the DMCA here: