So… Well… Many nice things came out of this – and I wrote about that at length – but last night I was thinking this interpretation may also offer an explanation of relativistic length contraction. Before we get there, let us re-visit our hypothesis.

The geometry of the wavefunction

The elementary wavefunction is written as:

Nature should not care about our conventions for measuring the phase angle clockwise or counterclockwise and, therefore, the ψ = a·ei[E·t − p∙x]/ħ function may also be permitted. We know that cos(θ) = cos(–θ) and sinθ = –sin(–θ), so we can write:

The vectors p and x are the the momentum and position vector respectively: p = (px, py, pz) and x = (x, y, z). However, if we assume there is no uncertainty about p – not about the direction nor the magnitude – then we may choose an x-axis which reflects the direction of p. As such, x = (x, y, z) reduces to (x, 0, 0), and p∙x/ħ reduces to p∙x/ħ. This amounts to saying our particle is traveling along the x-axis or, if p = 0, that our particle is located somewhere on the x-axis. Hence, the analysis is one-dimensional only.

The geometry of the elementary wavefunction is illustrated below. The x-axis is the direction of propagation, and the y- and z-axes represent the real and imaginary part of the wavefunction respectively.

Note that, when applying the right-hand rule for the axes, the vertical axis is the y-axis, not the z-axis. Hence, we may associate the vertical axis with the cosine component, and the horizontal axis with the sine component. You can check this as follows: if the origin is the (x, t) = (0, 0) point, then cos(θ) = cos(0) = 1 and sin(θ) = sin(0) = 0. This is reflected in both illustrations, which show a left- and a right-handed wave respectively. We speculated this should correspond to the two possible values for the quantum-mechanical spin of the wave: +ħ/2 or −ħ/2. The cosine and sine components for the left-handed wave are shown below. Needless to say, the cosine and sine function are the same, except for a phase difference of π/2: sin(θ) = cos(θ − π/2). 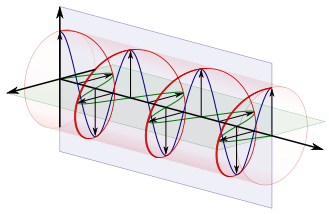 As for the wave velocity, and its direction of propagation, we know that the (phase) velocity of any wave F(kx – ωt) is given by vp = ω/k = (E/ħ)/(p/ħ) = E/p. Of course, the momentum might also be in the negative x-direction, in which case k would be equal to -p and, therefore, we would get a negative phase velocity: vp = ω/k = –E/p.

In contrast, the second de Broglie relation is somewhat harder to interpret. According to the p = h/λ relation, the wavelength is inversely proportional to the momentum: λ = h/p. The velocity of a photon, or a (theoretical) particle with zero rest mass (m0 = 0), is c and, therefore, we find that p = mv∙v = mc∙c = m∙c (all of the energy is kinetic). Hence, we can write: p∙c = m∙c2 = E, which we may also write as: E/p = c. Hence, for a particle with zero rest mass, the wavelength can be written as:

However, this is a limiting situation – applicable to photons only. Real-life matter-particles should have some mass[1] and, therefore, their velocity will never be c.[2]

Hence, if p goes to zero, then the wavelength becomes infinitely long: if p → 0 then λ → ∞. How should we interpret this inverse proportionality between λ and p? To answer this question, let us first see what this wavelength λ actually represents.

So now we get a meaningful interpretation for that wavelength. It is the distance between the crests (or the troughs) of the wave, so to speak, as illustrated below. Of course, this two-dimensional wave has no real crests or troughs: we measure crests and troughs against the y-axis here. Hence, our definition depend on the frame of reference. 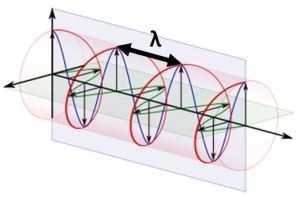 Now we know what λ actually represents for our one-dimensional elementary wavefunction. Now, the time that is needed for one cycle is equal to T = 1/f = 2π·(ħ/E). Hence, we can now calculate the wave velocity:

Unsurprisingly, we just get the phase velocity that we had calculated already: v = vp = E/p. The question remains: what if p is zero? What if we are looking at some particle at rest? It is an intriguing question: we get an infinitely long wavelength, and an infinite wave velocity.

Now, re-writing the v = E/p as v = m∙c2/m∙vg  = c/βg, in which βg is the relative classical velocity[3] of our particle βg = vg/c) tells us that the phase velocities will effectively be superluminal (βg  < 1 so 1/ βg > 1), but what if βg approaches zero? The conclusion seems unavoidable: for a particle at rest, we only have a frequency in time, as the wavefunction reduces to:

How should we interpret this?

[1] Even neutrinos have some (rest) mass. This was first confirmed by the US-Japan Super-Kamiokande collaboration in 1998. Neutrinos oscillate between three so-called flavors: electron neutrinos, muon neutrinos and tau neutrinos. Recent data suggests that the sum of their masses is less than a millionth of the rest mass of an electron. Hence, they propagate at speeds that are very near to the speed of light.

[3] Because our particle will be represented by a wave packet, i.e. a superimposition of elementary waves with different E and p, the classical velocity of the particle becomes the group velocity of the wave, which is why we denote it by vg.

4 thoughts on “A physical explanation for relativistic length contraction?”