This post further builds on the rather remarkable results we got in our previous posts. Let us start with the basics once again. The elementary wavefunction is written as:

Of course, Nature (or God, as Einstein would put it) does not care about our conventions for measuring an angle (i.e. the phase of our wavefunction) clockwise or counterclockwise and, therefore, the ψ = a·ei[E·t − p∙x]/ħ function is also permitted. We know that cos(θ) = cos(−θ) and sinθ = −sin(−θ), so we can write:

The vectors p and x are the momentum and position vector respectively: p = (px, py, pz) and x = (x, y, z). However, if we assume there is no uncertainty about p – not about the direction, and not about the magnitude – then the direction of p can be our x-axis. In this reference frame, x = (x, y, z) reduces to (x, 0, 0), and p∙x/ħ reduces to p∙x/ħ. This amounts to saying our particle is traveling along the x-axis or, if p = 0, that our particle is located somewhere on the x-axis. So we have an analysis in one dimension only then, which facilitates our calculations. The geometry of the wavefunction is then as illustrated below. The x-axis is the direction of propagation, and the y- and z-axes represent the real and imaginary part of the wavefunction respectively. 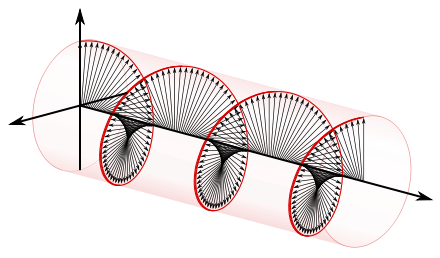 Note that, when applying the right-hand rule for the axes, the vertical axis is the y-axis, not the z-axis. Hence, we may associate the vertical axis with the cosine component, and the horizontal axis with the sine component. [You can check this as follows: if the origin is the (x, t) = (0, 0) point, then cos(θ) = cos(0) = 1 and sin(θ) = sin(0) = 0. This is reflected in both illustrations, which show a left- and a right-handed wave respectively.]

Now, you will remember that we speculated the two polarizations (left- versus right-handed) should correspond to the two possible values for the quantum-mechanical spin of the wave (+ħ/2 or −ħ/2). We will come back to this at the end of this post. Just focus on the essentials first: the cosine and sine components for the left-handed wave are shown below. Look at it carefully and try to understand. Needless to say, the cosine and sine function are the same, except for a phase difference of π/2: sin(θ) = cos(θ − π/2).

The frequency in time (oscillations or radians per second) is easy to interpret. A particle will always have some mass and, therefore, some energy, and it is easy to appreciate the fact that the wavefunction of a particle with more energy (or more mass) will have a higher density in time than a particle with less energy.

However, the second de Broglie relation is somewhat harder to interpret. Note that the wavelength is inversely proportional to the momentum: λ = h/p. Hence, if p goes to zero, then the wavelength becomes infinitely long, so we write:

Of course, we are talking a photon here. We get the zero rest mass for a photon. In contrast, all matter-particles should have some mass[1] and, therefore, their velocity will never equal c.[2] The question remains: how should we interpret the inverse proportionality between λ and p?

Let us first see what this wavelength λ actually represents. If we look at the ψ = a·cos(p∙x/ħ − E∙t/ħ) − i·a·sin(p∙x/ħ – E∙t/ħ) once more, and if we write p∙x/ħ as Δ, then we can look at p∙x/ħ as a phase factor, and so we will be interested to know for what x this phase factor Δ = p∙x/ħ will be equal to 2π. So we write:

So now we get a meaningful interpretation for that wavelength. It is the distance between the crests (or the troughs) of the wave, so to speak, as illustrated below. Of course, this two-dimensional wave has no real crests or troughs: they depend on your frame of reference.

So now we know what λ actually represent for our one-dimensional elementary wavefunction. Now, the time that is needed for one cycle is equal to T = 1/f = 2π·(ħ/E). Hence, we can now calculate the wave velocity:

Unsurprisingly, we just get the phase velocity that we had calculated already: v = vp = E/p. It does not answer the question: what if p is zero? What if we are looking at some particle at rest? It is an intriguing question: we get an infinitely long wavelength, and an infinite phase velocity. Now, we know phase velocities can be superluminal, but they should not be infinite. So what does the mathematical inconsistency tell us? Do these infinitely long wavelengths and infinite wave velocities tell us that our particle has to move? Do they tell us our notion of a particle at rest is mathematically inconsistent?

Maybe. But maybe not. Perhaps the inconsistency just tells us our elementary wavefunction – or the concept of a precise energy, and a precise momentum – does not make sense. This is where the Uncertainty Principle comes in: stating that p = 0, implies zero uncertainty. Hence, the σp factor in the σp∙σx ≤ ħ/2 would be zero and, therefore, σp∙σx would be zero which, according to the Uncertainty Principle, it cannot be: it can be very small, but it cannot be zero.

It is interesting to note here that σp refers to the standard deviation from the mean, as illustrated below. Of course, the distribution may be or may not be normal – we don’t know – but a normal distribution makes intuitive sense, of course. Also, if we assume the mean is zero, then the uncertainty is basically about the direction in which our particle is moving, as the momentum might then be positive or negative. 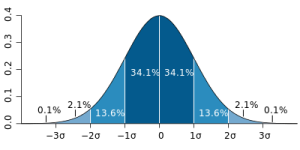 Hence, we need to superimpose a potentially infinite number of waves with energies and momenta centered on some mean value. It is only then that we get meaningful results. For example, the idea of a group velocity – which should correspond to the classical idea of the velocity of our particle – only makes sense in the context of wave packet. Indeed, the group velocity of a wave packet (vg) is calculated as follows:

This assumes the existence of a dispersion relation which gives us ωi as a function of ki – what amounts to the same – Ei as a function of pi. How do we get that? Well… There are a few ways to go about it but one interesting way of doing it is to re-write Schrödinger’s equation as the following pair of equations[4]:

Of course, we need to think about the subscripts now: we have ωi, ki, but… What about meff or, dropping the subscript, about m? Do we write it as mi? If so, what is it? Well… It is the equivalent mass of Ei obviously, and so we get it from the mass-energy equivalence relation: mi = Ei/c2. It is a fine point, but one most people forget about: they usually just write m. However, if there is uncertainty in the energy, then Einstein’s mass-energy relation tells us we must have some uncertainty in the (equivalent) mass too, and the two will, obviously, be related as follows: σm = σE/c2. We are tempted to do a few substitutions here. Let’s first check what we get when doing the mi = Ei/c2 substitution:

We get a very interesting but nonsensical condition for the dispersion relation here. I wonder what mistake I made. 😦

Let us try another substitution. The group velocity is what it is, right? It is the velocity of the group, so we can write: ki = p/ħ = mi ·vg. This gives us the following result:

It is yet another interesting condition for the dispersion relation. Does it make any more sense? I am not so sure. That factor 1/2 troubles us. It only makes sense when we drop it. Now you will object that Schrödinger’s equation gives us the electron orbitals – and many other correct descriptions of quantum-mechanical stuff – so, surely, Schrödinger’s equation cannot be wrong. You’re right. It’s just that… Well… When we are splitting in up in two equations, as we are doing here, then we are looking at one of the two dimensions of the oscillation only and, therefore, it’s only half of the mass that counts. Complicated explanation but… Well… It should make sense, because the results that come out make sense. Think of it. So we write this:

We then get the dispersion relation without that 1/2 factor:

The mi = Ei/c2 substitution then gives us the result we sort of expected to see:

Let us put this aside for the moment and focus on something else. If you look at the illustrations above, you see we can sort of distinguish (1) a linear velocity – the speed with which those wave crests (or troughs) move – and (2) some kind of circular or tangential velocity – the velocity along the red contour line above. We’ll need the formula for a tangential velocity: vt = a∙ω.

For an electron, we did this weird calculation. We had an angular momentum formula (for an electron) which we equated with the real-life +ħ/2 or −ħ/2 values of its spin, and we got a numerical value for a. It was the Compton radius: the scattering radius for an electron. Let us write it out:

Using the right numbers, you’ll find the numerical value for a: 3.8616×10−13 m. But let us just substitute the formula itself here:

This is fascinating ! And we just calculated that vp is equal to c. For the elementary wavefunction, that is. Hence, we get this amazing result:

This tangential velocity is twice the linear velocity !

Of course, the question is: what is the physical significance of this? I need to further look at this. Wave velocities are, essentially, mathematical concepts only: the wave propagates through space, but nothing else is really moving. However, the geometric implications are obviously quite interesting and, hence, need further exploration.

One conclusion stands out: all these results reinforce our interpretation of the speed of light as a property of the vacuum – or of the fabric of spacetime itself. 🙂

[4] The meff is the effective mass of the particle, which depends on the medium. For example, an electron traveling in a solid (a transistor, for example) will have a different effective mass than in an atom. In free space, we can drop the subscript and just write meff = m. As for the equations, they are easily derived from noting that two complex numbers a + i∙b and c + i∙d are equal if, and only if, their real and imaginary parts are the same. Now, the ∂ψ/∂t = i∙(ħ/meff)∙∇2ψ equation amounts to writing something like this: a + i∙b = i∙(c + i∙d). Now, remembering that i2 = −1, you can easily figure out that i∙(c + i∙d) = i∙c + i2∙d = − d + i∙c.

2 thoughts on “The geometry of the wavefunction (2)”