My posts and article on the wavefunction as a gravitational wave are rather short on the exact geometry of the wavefunction, so let us explore that a bit here. By now, you know the formula for the elementary wavefunction by heart:

If we assume the momentum p is all in the x-direction, then the p and x vectors will have the same direction, and p∙x/ħ reduces to p∙x/ħ. This amounts to saying our particle is traveling along the x-axis. The geometry of the wavefunction is illustrated below. The x-axis is the direction of propagation, and the y- and z-axes represent the real and imaginary part of the wavefunction respectively. 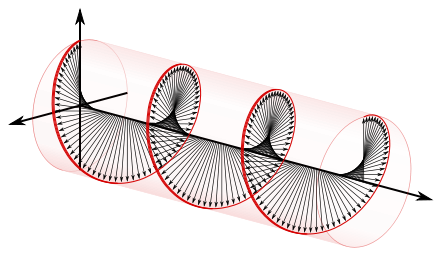 Note that, when applying the right-hand rule for the axes, the vertical axis is the y-axis, not the z-axis. Hence, we may associate the vertical axis with the cosine component, and the horizontal axis with the sine component. If the origin is the (x, t) = (0, 0) point, then cos(θ) = cos(0) = 1 and sin(θ) = sin(0) = 0. This is reflected in both illustrations, which show a left- and a right-handed wave respectively. I am convinced these correspond to the two possible values for the quantum-mechanical spin of the wave: +ħ/2 or −ħ/2. But… Well… Who am I? The cosine and sine components are shown below. Needless to say, the cosine and sine function are the same, except for a phase difference of π/2: sin(θ) = cos(θ − π/2)

Surely, Nature doesn’t care a hoot about our conventions for measuring the phase angle clockwise or counterclockwise and therefore, the ψ = a·ei[E·t − p∙x]/ħ function should, effectively, also be permitted. We know that cos(θ) = cos(–θ) and sinθ = –sin(–θ), so we can write:

However, we argued that the physical dimension of the components of the wavefunction may be usefully expressed in N/kg units (force per unit mass), while the physical dimension of the electromagnetic wave are expressed in N/C (force per unit charge). This, in fact, explains the dichotomy between bosons (photons) and fermions (spin-1/2 particles). Hence, all matter-particles should have some mass.[1] But how we interpret the inverse proportionality between λ and p?

We should probably first ask ourselves what wavelength we are talking about. The wave only has a phase velocity here, which is equal to vp = ω/k = (E/ħ)/(p/ħ) = E/p. Of course, we know that, classically, the momentum will be equal to the group velocity times the mass: p = m·vg. However, when p is zero, we have a division by zero once more: if p → 0, then vp = E/p → ∞. Infinite wavelengths and infinite phase velocities probably tell us that our particle has to move: our notion of a particle at rest is mathematically inconsistent. If we associate this elementary wavefunction with some particle, and if we then imagine it to move, somehow, then we get an interesting relation between the group and the phase velocity:

We can re-write this as vp·vg = c2, which reminds us of the relationship between the electric and magnetic constant (1/ε0)·(1/μ0) = c2. But what is the group velocity of the elementary wavefunction? Is it a meaningful concept?

The phase velocity is just the ratio of ω/k. In contrast, the group velocity is the derivative of ω with respect to k. So we need to write ω as a function of k. Can we do that even if we have only one wave? We do not have a wave packet here, right? Just some hypothetical building block of a real-life wavefunction, right? Right. So we should introduce uncertainty about E and p and build up the wave packet, right? Well… Yes. But let’s wait with that, and see how far we can go in our interpretation of this elementary wavefunction. Let’s first get that ω = ω(k) relation. You’ll remember we can write Schrödinger’s equation – the equation that describes the propagation mechanism for matter-waves – as the following pair of equations:

We learn nothing new. We are going round and round in circles here, and we always end up with a tautology: as soon as we have a non-zero momentum, we have a mathematical formula for the group velocity – but we don’t know what it represents – and a finite wavelength. In fact, using the p = ħ∙k = h/λ relation, we can write one as a function of the other:

What does this mean? It resembles the c = h/mλ relation we had for a particle with zero rest mass. Of course, it does: the λ = h/mc relation is, once again, a limit for vg going to c. By the way, it is interesting to note that the vp·vg = c2 relation implies that the phase velocity is always superluminal. That’ easy to see when you re-write the equation in terms of relative velocities: (vp/c)·(vg/c) = βphase·βgroup = 1. Hence, if βgroup < 1, then βphase > 1.

So now we get a meaningful interpretation for that wavelength: it’s that distance between the crests of the wave, so to speak, as illustrated below.

Can we now find a meaningful (i.e. geometric) interpretation for the group and phase velocity? If you look at the illustration above, you see we can sort of distinguish (1) a linear velocity (the speed with which those wave crests move) and (2) some kind of circular or tangential velocity (the velocity along the red contour line above). We’ll probably need the formula for the tangential velocity: v = a∙ω. If p = 0 (so we have that weird infinitesimally long wavelength), then we have two velocities:

Let’s think about this. For a particle at rest, we had this weird calculation. We had an angular momentum formula (for an electron) which we equated with the real-life +ħ/2 or −ħ/2 values of its spin. And so we got a numerical value for a. It was the Compton radius: the scattering radius for an electron. Let me copy it once again:

Just to bring this story a bit back to Earth, you should note the calculated value: a = 3.8616×10−13 m. We did then another weird calculation. We said all of the energy of the electron had to be packed in this cylinder that might of might not be there. The point was: the energy is finite, so that elementary wavefunction cannot have an infinite length in space. Indeed, assuming that the energy was distributed uniformly, we jotted down this formula, which reflects the formula for the volume of a cylinder:

It is, literally, an astronomical value: 0.175×1012 m is 175 million kilometer, so that’s like the distance between the Sun and the Earth. We wrote, jokingly, that such space is too large to look for an electron and, hence, that we should really build a proper packet by making use of the Uncertainty Principle: allowing for uncertainty in the energy should, effectively, reduce the uncertainty in position.

We can write this as a function of m and the c and ħ constants only:

A weird formula but not necessarily nonsensical: we get a finite speed. Now, if the wavelength becomes somewhat less astronomical, we’ll get different values of course. I have a strange feeling that, with these formula, we should, somehow, be able to explain relativistic length contraction. But I will let you think about that as for now. Here I just wanted to show the geometry of the wavefunction a bit more in detail.

[1] The discussions on the mass of neutrinos are interesting in this regard. Scientists all felt the neutrino had to have some (rest) mass, so my instinct on this is theirs. In fact, only recently experimental confirmation came in, and the mass of the known neutrino flavors was estimated to be something like 0.12 eV/c2. This mass combines the three known neutrino flavors. To understand this number, you should note it is the same order of magnitude of the equivalent mass of low-energy photons, like infrared or microwave radiation.

One thought on “The geometry of the wavefunction”